Published 23 January 2019
Interview with Kerstin Englund, a longtime Stora Enso employee and a top level Swedish para-rider specialized in dressage. Among many other merits, she holds several gold medals from Swedish Championships, placed fourth at the World Championships in 2003, and finished in eighth place at the Paralympics in Athens in 2004.

It all started back in 1981, when Kerstin was 12 years old and took her first riding lesson. “I loved it right away, and before long I bought my first horse,” she says. “Then, when it was time for high school I chose a special program that focused on horses. Riding was my passion from quite a young age.”

In 1993 Kerstin’s life took an unexpected turn due to a non-riding-related fall that broke her back and left her paralyzed from the waist down. “Among many other things, I thought I’d never be able to ride again,” she says. “We sold my horse while I was still in the hospital. I thought that was going to be the end of it.”

Kerstin wasn’t sure if she would be able to work again either, she says, but her manager and fellow employees at Stora Enso believed in her and encouraged her to return. “So eight months after the accident I was back in the office part time, which made a huge difference for me. It meant so much to be able to think about something other than the accident and my injury.”

As the months passed, Kerstin tried to find other activities she might enjoy in place of riding but it was difficult. “Then, during a rehabilitation program I attended, there was an equestrian therapy component. I was really skeptical of trying to ride without being able to feel my legs but finally I did, and it worked! My husband was so delighted that he arranged for the horse to be brought to our farm at the end of the program. For the first 14 days I refused to have anything to do with her, but then I relented and took her for a ride. She took very good care of me and made me feel safe.”

Shortly thereafter, Kerstin and her husband discovered the trainer of Sweden’s national para-dressage team lived only about 100 km away. They contacted her and got help to customize Kerstin’s stirrups. Kerstin began competing just a few months later, and within two years she had qualified to compete in the Nordic Championships.

“The fantastic thing about equestrian therapy is that it allows everyone to change identity for a while – to stop being the blind guy or the woman in the wheelchair or whatever – and just be riders,” Kerstin explains. “That was very liberating.”

Kerstin thinks that rediscovering riding after her accident has made a huge difference to her quality of life. To help others in similar situations, she actively promotes equestrian therapy for people with disabilities.

“It’s amazing to have four legs to carry me, so that I can get out into nature and explore forests paths that I wouldn’t be able to navigate in a wheelchair,” she explains. She says it has been great physical training for her as well, and “a very nice change of scenery compared the physio-therapy rooms I spent so much time in after my accident.”

In the process of switching to pellets

Kerstin and her husband now have two horses in their stable, along with a Shetland pony for company. They are currently in the process of switching over to using pellets for the bedding.

“On top of the environmental and economic aspects, one of the main reasons we’re switching to pellets is because the bags are so much easier to handle,” Kerstin explains. “People often assume that because I’m in a wheelchair I don’t work in the stable, but I actually do all the work that any other horse owner does – feeding, mucking out, adding fresh bedding, you name it. From what I’ve heard from people who have already switched, I think pellets are going to make the stable work significantly easier because they’re so absorbent and long lasting.” 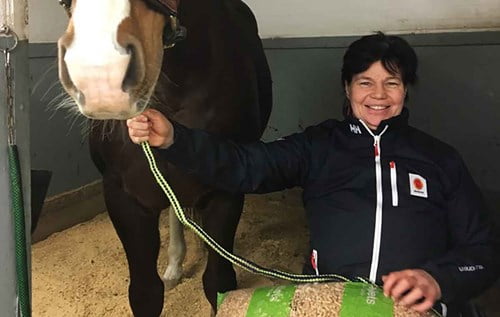 "If you store your bedding material outdoors, I prefer pellets because they do not freeze in the bag. For example, wood chips and shavings can freeze hard together when stored outdoors, but pellets are very dry when they are in the bags!"