Published 13 May 2019 by Courtney Tenz Photo by iStock
As plastic refuse washes up on idyllic beaches, the world is turning its attention to renewable alternatives.

That refrain, commonly heard at supermarkets in the 1980s, is not one you often hear in use today. From Colombia and Chile to Morocco and Indonesia, countries around the world are implementing laws that either ban or tax the use of plastic shopping bags.

The bans come as images show plastic trash washing up on idyllic beaches and news reports reveal garbage patches are swirling in our oceans. The state of California wants to make plastic straws illegal and McDonald’s has already done away with them at their stores in Ireland and the UK.

At the same time, consumers have become more aware of just how bad plastic waste is for the environment thanks to initiatives like Finland’s plastic-free month of March, during which media give citizens tips on how to reduce and substitute their plastic use. Cutting down on plastic usage has become part of the zeitgeist.

The shift away from plastics appears to be easier than we might think – but it doesn’t necessarily have to mean a shift back to a pre-plastics past. While our grandparents had no trouble packing the cutlery and chinaware into a picnic basket instead of single-use plastic ware, we’ve become accustomed to the convenience of disposable packaging. And now, more than ever before, there are numerous innovations that offer more environmentally-friendly alternatives to plastic.

Paper straws and cups made of wood fiber-based alternatives have begun cropping up at food retailers everywhere. Stora Enso has committed to increasing its use of renewable materials and currently work with biocomposites like DuraSense™ and will soon launch a cost-competitive carbon fibre for lightweight structures and energy storage.

As retailers like the Dutch supermarket chain Ekoplaza aim to make its 74 stores plastics-free by the end of the year, it’s equally as important to replace remaining plastics where possible. This is why Stora Enso also works intensively with microfibrillated cellulose MFC. After all, cutting back on waste is vital for the sake of the environment. But replacing plastics does not have to spell a step back in time, rather the opposite.

Countries around the world are implementing laws that either ban or tax the use of plastic shopping bags. 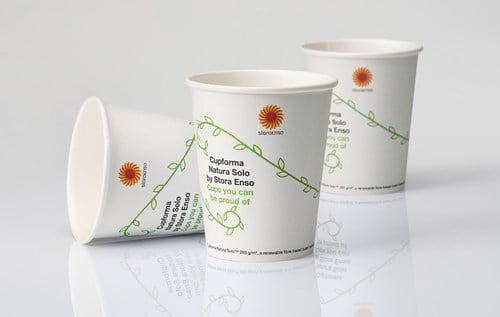 Stora Enso introduces Cupforma Natura Solo™, a renewable paperboard for paper cups. The innovative material is suitable for hot and cold drinking cups, as well as for ice cream packaging