A journey to perfection

A visually pleasing sample book with the right finishes can be the deciding factor when choosing between papers. That is why when planning and creating the new Lumi Sample Book, we knew that strategy and design had go hand in hand. Marko Valkeapää, Marketing Manager for Lumi at Stora Enso and designer Miika Saksi compiled their thoughts on what they learned along the way and what they’re most proud of.

Marko is no stranger to a sample book. Still, coming into this year’s project, the expectations were through the roof.

“This was my fourth time making the Lumi Sample Book and as always, the project was not only a sample book update but also a learning experience on new postproduction possibilities. LumiArt & LumiSilk’s previous Sample Book won a Silver Leaf (FSEA) for the postproduction techniques used in it, so the bar was set high”, Marko describes the demanding project.

Designing and layout for the new sample book was done by Miika Saksi. No matter how long you’ve been in the field, few designers can say they’ve worked on a project quite as varied.

“Although I’ve done pagination for books, I’ve never worked with a project like the Lumi Sample Book before. With such a wide variety of grammages, special effects and finishes, the layout must be planned with meticulous attention to detail”, Miika explains. 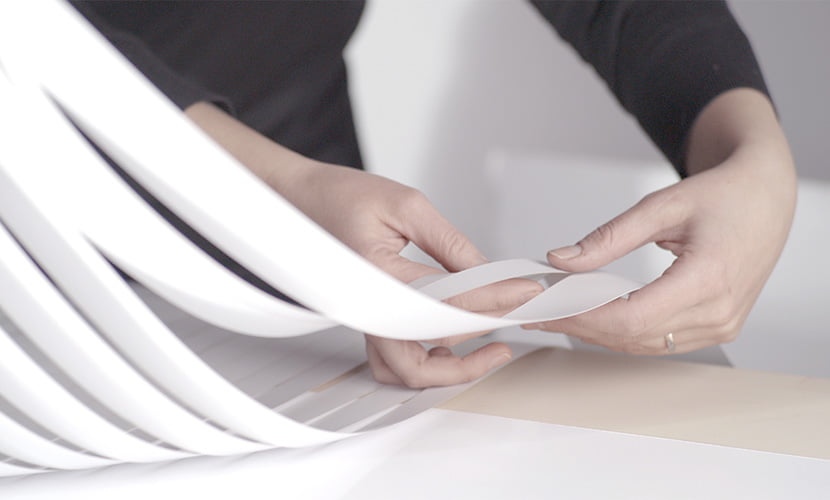 The effects for the new sample book were specifically chosen to let readers experience Lumi’s industry-leading performance first-hand. This year, the range was wider than ever.

“On Lumi, almost anything is possible. The sample book features a huge variety of interesting effects showcasing Lumi’s performance on the most demanding printing jobs. Folding is Lumi’s signature strength and the characteristic which sets it apart from others. Lumi’s superior folding properties can of course be experienced without a special printing technique but pages 47 & 48 of the new sample book highlight just how well Lumi performs under stress”, Marko continues.

Not only does the new Sample Book highlight Lumi’s performance, it also showcases the aesthetic qualities of the material. Nearly all of the Sample Book’s images feature the paper itself.

“The book is all about Lumi, even the pictures in it are Lumi sheets and reels which have been treated in different ways: printed, embossed, cut, coloured or foiled, just to name a few. With this, we were able to choose the coming effect while we the pictures were shot”, Marko explains.

“The choice to work with Lumi as the centrepiece for the sample book’s imagery presented us with some interesting challenges. Often in photography, you focus on the details: the things that break the pattern and stand out from the crowd. Shooting paper, however, you must be a bit more creative. The material itself is completely blank and lacks all imperfection. So, we had to figure out how to play with the material, how to bend it and shape it so that the light hits it just right. In a way, we had to figure out how to make the material less perfect in order to make the shots interesting”, Miika adds.

With special effects and finishes from cover to cover, the new sample book has something for everyone.

“My favourite picture and printing technique combination can be found on pages 38 & 39, where we feature a structure Spot-UV varnish. The 3D embossing on page 53 is another front-runner for me. Both effects bring the paper to life in such a stunning, visual way. Not to forget that somewhere in the book there’s a secret text which can only be seen in the dark! Pretty cool, too!” Marko rejoices.

“In visual design, I’m drawn to more minimalistic approaches. That’s why the cover of the sample book really speaks to me with its white-on-white, no-frills-added aesthetic. But I have to admit that the iridescent colour-blast on pages 94 & 95 is pretty cool too!” Miika concludes. 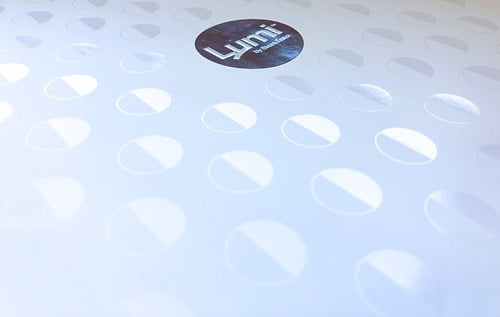 Lumi creates an unparalleled reader experience. From the vivid colours at first sight to the extraordinary textures and smooth folds.