Veracel creates value in the Bahía region by offering employment, paying taxes, supporting education and livelihoods, and by protecting and restoring rainforest. Veracel has a long history of constructive dialogue and cooperation with the local communities.

The YLE programme presents critical individuals, some of whom are members of the local landless movements in Bahía and have illegally occupied Veracel’s land. These individuals claim Veracel is evicting people violently from its lands, making people buy back their own land, and using corruption in relations with the local media and authorities. The programme also features an academic who criticizes Veracel and its land use. The programme also gives a voice to Veracel and Stora Enso.

Stora Enso, Veracel, and local authorities feel that the situation regarding disagreements on land use in the area has significantly improved for several years and, in particular, after the fall of 2018 when over 300 new families joined the most recent agreement signed with landless movements.

Why do the landless movements criticize Veracel?

The landless movements in Brazil are broad political movements aiming for land reform, as land property is unevenly distributed in Brazil. Illegal land invasions of private property are a long-running challenge in Brazil that have affected various actors who use areas of land, such as mining companies and farming business. While Veracel is not the root cause of the problems that landless people face, it aims to be part of the local solution, without taking the role of the state.

Can Veracel solve the land conflicts?

How do you justify Veracel’s land use in Brazil?

Veracel creates value in the Bahía region: it has created over 2 000 jobs, pays taxes, supports education and agriculture financially, and protects and restores rainforests. To support the livelihoods of neighbouring communities, Veracel makes some of its land available to family farmers and provides them with training and technical support. Veracel also enables local beekeepers to keep their hives on the company’s land, and provides training in beekeeping. Read more.

Is Veracel operating on lands that do not belong to the company?

No. All Veracel’s land has been acquired legally and the documentation on it exists. The farmers in the programme who claim Veracel has taken their lands, have occupied the lands illegally. Veracel’s land acquisitions have been done in good faith between the parties involved, according to fair market prices, all relevant duties paid, the land being cultivated, and without any acquisitions questioned at the time. If there are areas of conflict due to, for example, unclear borders, outdated maps, or similar issues, they are thoroughly investigated.

Approximately half of Veracel’s 213 500 hectares of land is dedicated to rainforest preservation and restoration, and Veracel aims to restore approximately 400 hectares of rainforest habitat every year. A total of 7 217 hectares of forest, corresponding to over 9 000 soccer fields, has been restored between 1994 and the end of 2018. This significant contribution to the conservation of natural Atlantic rainforest and its rich biodiversity has been recognised by both the Brazilian authorities and international stakeholders. Read more  about our work to replant rainforest and how endangered jaguars are finding their way back into Bahía.

Does Veracel accept corruption and violence?

Contrary to the claims presented in the programme, Veracel does not threaten or bribe anyone, or use violence. Veracel’s security guards do not carry any weapons and they are trained in human rights and conflict management. The company has a clear non-violence policy that it also expects its business partners to abide by. Any eviction of people from illegally occupied areas must be based on court decisions and carried out by the authorities, and Veracel does not allow any form of violence in these situations.

Update: What has happened at the Sítio Esperança and Sítio Mutum sites during summer 2019?

Based on a court ruling issued in May 2019, authorities took possession of illegally occupied land at the end of June. The reclaiming of the lands included the Veracel-owned areas of Sítio Esperança and Sítio Mutum, which had been illegally occupied by the Pereira brothers who are local farmers. The authority-led reclaim was carried out peacefully but later there was an attempt to re-occupy the areas.

At the beginning of July, a group of violent land occupiers arrived at the Veracel-owned Sítio Esperança and Sítio Mutum. Three guards were injured in the attack and their lives were threatened. The attackers also set several cars on fire. The case was widely covered by Brazilian media and the occupiers’ actions were condemned. A news clip from Brazil's main TV station Globo shows video footage from July of Veracel’s security guards being attacked and their cars destroyed. 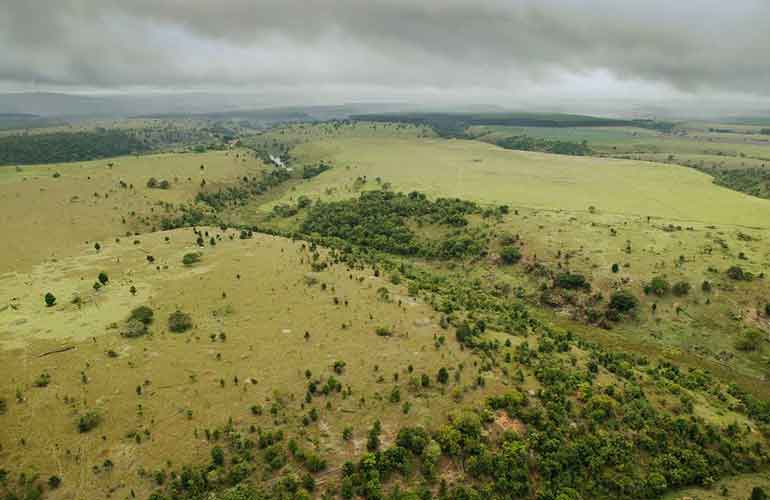 A typical landscape in Veracel operating area, Bahia, before establishment of eucalyptus plantations. The native Atlantic rainforest has been extensively logged and cleared for pasture between the 1960s and 1980s. 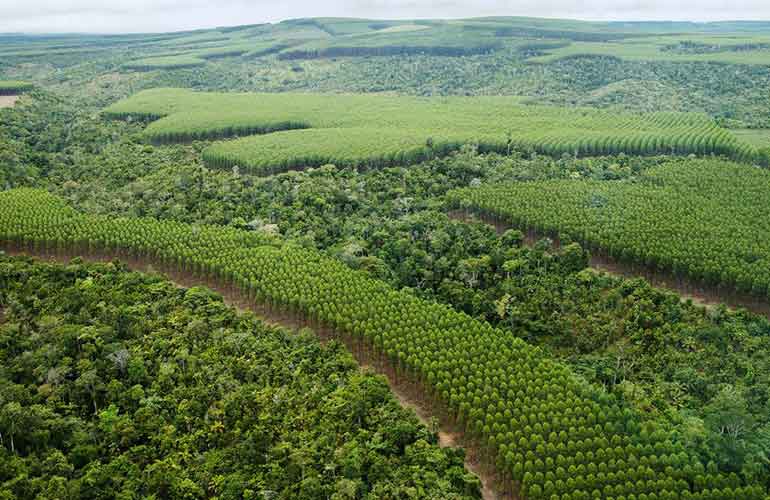 A mosaic of Veracel plantation and protected and restored native Atlantic rainforest. 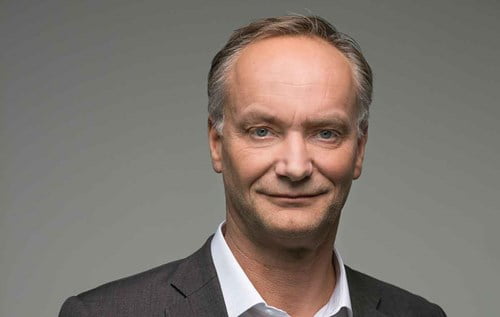 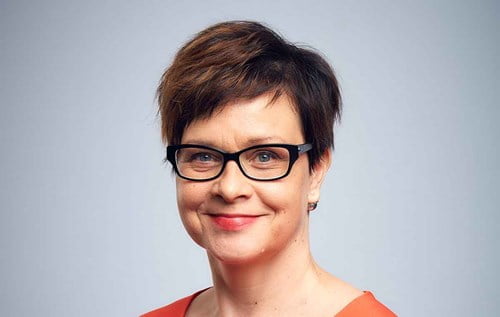