Published 22 May 2017
​Brazil's Atlantic rainforest is considered to be one of world's richest habitats in terms of biodiversity. Veracel's pulp mill and its eucalyptus plantations are located in an area that is becoming a popular destination for birdwatchers. But can birds thrive in landscapes that consist of both natural rainforest and eucalyptus plantations?

In the past century, the coast of Brazil witnessed a loss of rainforest to accommodate the growth of cities, industries, agriculture, and sawmilling. By the end of the 1980s, almost all tracts of native forests in southern Bahia had been clear-cut. Landowners in the region converted their deforested land properties to other uses, especially cattle ranching.

Veracel, a joint operation between the companies Stora Enso and Fibria, started to buy pasture land and experiment with planting trees in the state of Bahia in 1991. Today, Veracel owns some 215 000 hectares of land in Bahia. Half of this land consists of former degraded pasturelands now used to grow eucalyptus trees for the pulp mill. The other half is dedicated to the protection and restoration of the remaining Atlantic rainforest habitat. Veracel aims to restore 400 hectares of rainforest habitat every year through local partnerships. So far 6 000 hectares have been restored since 1994, connecting together thousands of hectares of Atlantic rainforest fragments.

"The Atlantic Forest biome is a global hotspot for biodiversity, and the Central Corridor of Atlantic Forest, near Veracel, is known as 'a hotspot within a hotspot'," explains Beto Mesquita, Director of Landscape Strategy at Conservation International Brazil. "Many bird species living in this region are threatened with extinction, including some endemic species not found anywhere else in the world."

Many bird species are very sensitive to changes in the environment, such as pollution and deforestation. They are among the first species to vanish from environmentally degraded areas, so this makes them an important indicator of local biodiversity. Of the 10 000 bird species in the world nearly 2 000 live in Brazil – and almost 900 thrive in the Atlantic rainforest. But what kind of a habitat do commercial eucalyptus plantations, characterised by the predominance of a single tree species, offer birds?

"Some bird species visit plantations and feed on the flowers, fruits, and insects that live there, while others shelter or nest in plantations, especially in the canopy layer. However, most of the bird species found in such homogenous environments are the most common ones, which tend not to require protected natural habitats," explains Virginia Londe de Camargos, a biologist and environmental expert who works for Veracel.

Even if fast-growing plantations do not offer the most ideal habitat for many bird species, commercial plantations established on former pasturelands play a broader role, contributing to the vitality of the bird population by stabilising local land use and enabling other areas to be fully protected.

The diversity of species found in plantations depends on their proximity to areas of natural rainforest vegetation.

"Veracel's plantations are interspersed with areas of native forest, including natural remnants, regenerated or restored areas, and protected areas with near natural characteristics. This creates an environment with high ecological permeability. Even if plantations are not ideal habitat for native birds in themselves, mosaic plantations serve as corridors between native forests, contributing to genetic exchanges, and thereby reducing the risk of extinction," Beto Mesquita adds.

Veracel actively helps to enhance the rich biodiversity of the region around its plantations. The company owns a private natural heritage reserve called Estação Veracel, where research is conducted, native and endangered ecosystems are protected, and environmental education is provided for visitors.

The reserve's latest initiative focuses on developing ecotourism, with a special focus on birdwatching, in partnership with Conservation International, Instituto Chico Mendes, and RPPN Rio do Brasil. Veracel's 6 069 hectare private reserve is one of four protected areas included in this ambitious programme together with Pau Brasil National Park, Rio dos Frades Wildlife Refuge and RPPN Rio do Brasil.

"This region is one of the main tourist destinations in Brazil, but nature-related activities such as trekking and birdwatching still account for only a small share of tourism here," explains Mesquita.

The initiative's partners have already been identifying the best sites for birdwatching, and producing a field guide to local species for birdwatchers. For communities living around Veracel, the influx of birdwatchers and their use of local services can generate welcome income and employment, boosting the region's social development.

"As the world's population becomes more and more urbanised, people are increasingly disconnected from nature. Birdwatching is one of the best ways to start reconnecting. By organising services and preparing protected areas to receive visitors, this region can set a good example for birdwatching tourism development in Brazil and even internationally," concludes Mesquita. 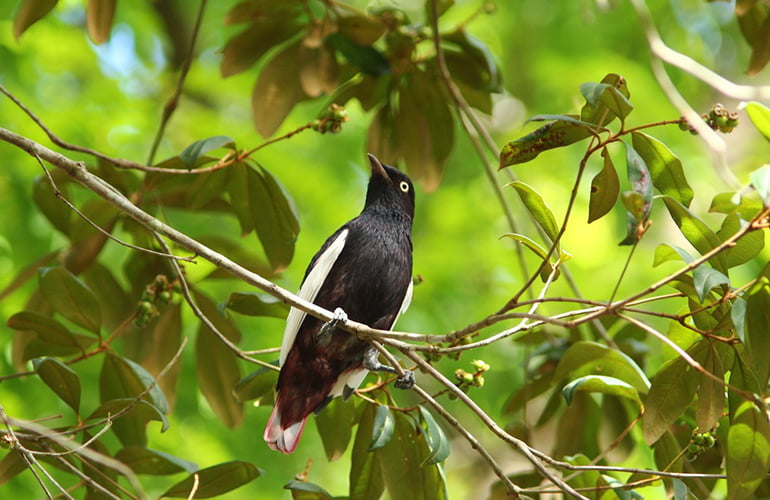 The white-winged cotinga (Xipholena atropurpurea) is endemic to Brazil.

Read more on this topic: