Published 7 August 2017
Beetles, birds, and insects – decaying wood provides habitats for a variety of small decomposers and larger animals in the forest. Stora Enso is committed to increasing the amount of decaying wood in Finnish forests for the benefit of biodiversity. Well-managed forests also play an important role in combatting global warming.

We start our journey in Lappeenranta, in the South-Eastern corner of Finland, close to the Russian boarder. Tom Clayhills, Visiting Staff Scientist at Turku University, and Jussi Vilén, Research technician at Helsinki University’s Lammi Biological Station, have been mapping beetle fauna in this area for about nine years.

Beetles have an important role to play in the ecosystem as decomposers of organic matter. Beetles and other bugs ensure that nutrients are released and become available again to the future generation of growing trees that absorb carbon dioxide from the atmosphere.

“Beetles are the decomposers that usually first find their way onto dead wood and start the decomposing process,” explains Clayhills. “They are later followed by other species, such as other insects and wood infesting fungi.” 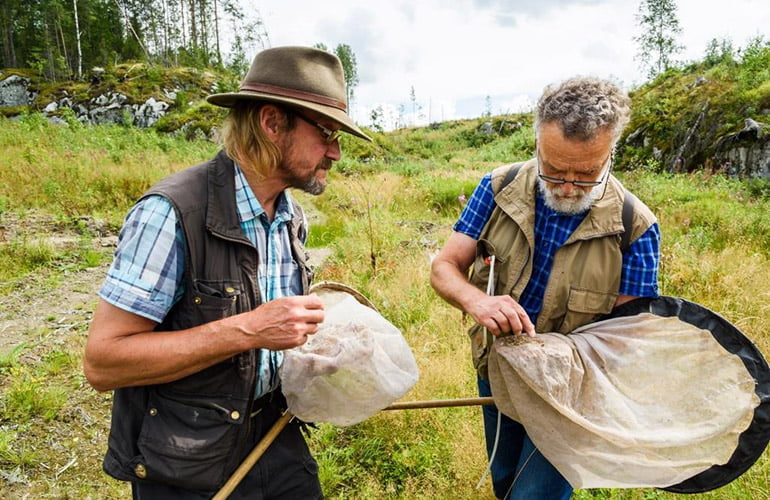 Jussi Vilén and Tom Clayhills checking their nets for beetles and other insects.

Particularly broadleaved and soft trees, such as Aspen and Goat Willow, make a great habitat for both common and rare or endangered beetles and other bugs.

“There are currently more than 3 800 known beetle species in Finland, and every year close to one dozen new ones are identified,” Clayhills asserts. “As a consequence of global warming, new species are drifting from Russia to Finland, which makes our research spot by the boarder ideal for observing new species, as well as the return of regionally extinct ones.”

During 2014–2017, Stora Enso has supplied small amounts of aspen wood to Clayhills’ and Vilen’s observation spot to improve the conditions for their research.

“Some beetle species thrive better in the shaded forests whereas others prefer the sunny forest edges, and each species has their favourite tree species for creating their microhabitats,” explains Clayhills. “In addition, many birds use beetles, particularly their larvae, as nutrition.”

“Safeguarding the biodiversity of forests is high on Stora Enso’s agenda,” says Pekka Kallio-Mannila, Head of Sustainability at Stora Enso’s Wood Supply Finland. “Decaying wood has been identified as one of the key factors affecting forest biodiversity.”

Stora Enso is committed to increasing the amount of decaying wood in Finnish forests. In practice, this means introducing new ways of working when harvesting – such as by leaving “artificial dead trees” at the harvesting site by cutting retention trees at the height of three metres to speed up their decay process.

The company aims to leave at least two artificial dead trees per hectare, adding up to 150 000 new decaying trees in Finnish forests every year. Stora Enso has trained its own employees as well as harvesting contractors in the recently introduced practices. However, as Stora Enso does not own any forests in Finland, the key is to also get forest-owners on board as it is they who make the ultimate decision on harvesting practices in their forests.

“This is a simple yet very effective method of increasing the amount of dead wood in forests,” Kallio-Mannila asserts. “We are now actively providing knowledge of the benefits of decaying wood on biodiversity for Finnish forest-owners. Economically, it is not a big sacrifice for them, but the potential environmental benefits are significant.”

Between May and September each year, Clayhills and Vilén make monthly field trips to Lappeenranta to map and collect beetle fauna. The winter months are spent identifying, analysing, and listing the species. The data is also provided to the Finnish authorities to be used for the categorisation of endangered species.

According to Clayhills, it is crucial for biodiversity to have decaying wood of different ages and species in forests. Such conditions best imitate the natural forest lifecycle.

In recent years, the importance of decaying wood has been better acknowledged among all forestry actors in Finland but the work to build awareness continues.

“We want to contribute towards further developing the culture and attitudes to recognise the importance of decaying wood as part of sustainable forestry practices,” concludes Kallio-Mannila. “For Stora Enso, this is one important action for sustainably combining bio-economy and biodiversity.” 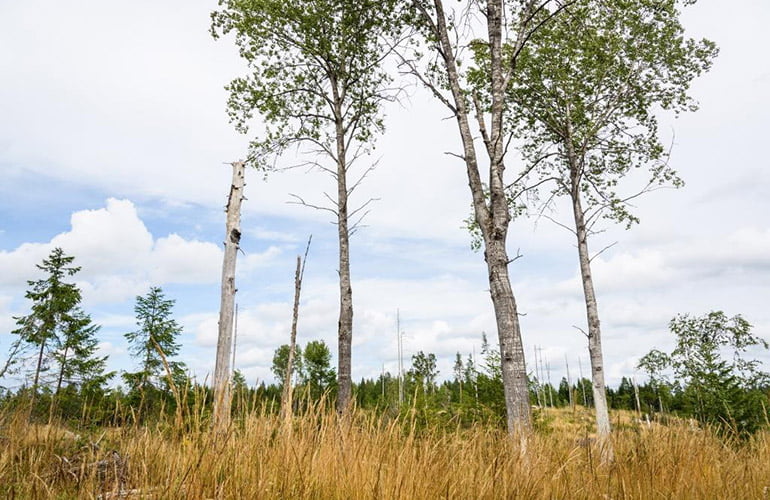 Read more on this topic: