Send us a message
Search for contacts here
Find a contact
Look for a job at Stora Enso.
Get a job
Published 22 February 2018
Drones are becoming a familiar sight around the world, whether they are used for fun or to increase automation. But have you thought about what they can do to keep people safe?

Stora Enso is testing drones at several mills in Finland, the Czech Republic, and China to make woodyard inventories faster, more accurate – and safer. Using drones for stocktaking means that workers do not need to walk between logpiles or watch out for the large telescopic handling machines used to move logs. This, of course, reduces the risk of accidents and injuries.

The drone used at Stora Enso's mills is a standard, commercially available model. But our experts have created a special methodology to help map out flying routes and facilitate automatic conversions and 3D calculations. Once a flying route has been defined, the drone can perform an inventory independently – though still under human supervision.

"Woodyard inventories were our first priority task for drones, but the system is scalable and can also be used to measure piles of wood chips – or practically anything," says Mika Korvenranta, Project Manager at Wood Supply Finland. "Drones can be equipped with different sensors, allowing us to measure several variables during a single flight."

Flying firefighters to the rescue

Stora Enso's Imatra Mills in Finland are meanwhile piloting a flying firefighter robot, developed by a local start-up. Whenever a fire alarm goes off, the robot automatically fits itself with a new battery, downloads the information it needs from the alarm system, and then promptly flies off to investigate.

"Such robots can help our first response team to better locate the scene of any fire and also give us information about relevant weather conditions, helping us to react faster," says Mikko Parikka, Fire and Security Manager at Imatra Mills. "They can particularly give us valuable footage from places that are difficult for people to get to, such as locations where hazardous gases are in use."

Drones can also support first response teams by extinguishing small fires on their own, lifting useful equipment, and by warning and instructing people near accident scenes using attached loudspeakers.

"In the future, drones could be used to improve the prevention of fires and accidents as they are able to monitor challenging sites such as woodchip conveyer belts running high above the ground," Parikka says. "New technological advances like these will help us keep people safe." 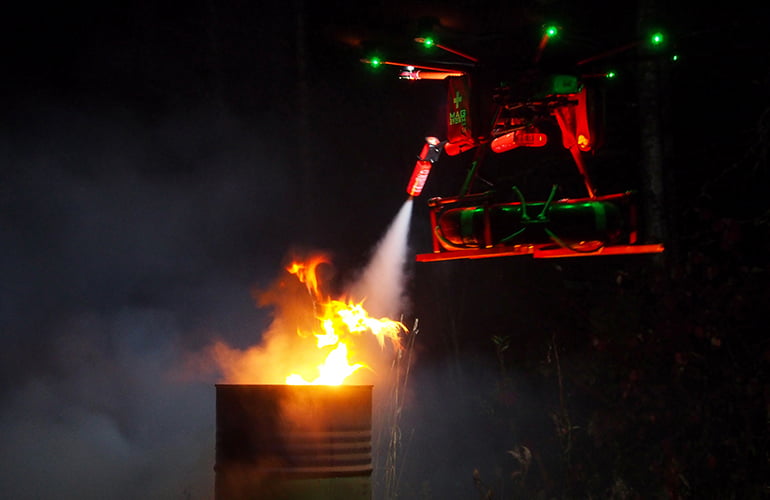 Flying robots can extinguish small fires on their own.

Our approach: Employees and wider workforce