France, Germany, Italy, UK or US? – Which country is the biggest magazine reader?

Send us a message
Search for contacts here
Look for a job at Stora Enso.
Get a job
Published 27 January 2020 by Stora Enso
Which country reads more print magazines, Italy or the UK? Do the French manage their screen-time better than the Germans? A global survey reveals that when it comes to the way we read magazines, not every country is the same. With figures from France, Germany, Italy, the UK and the US – we compiled a list of the most interesting differences in global reading habits.

Many French want to “switch off” from digital

Germans have their screen-time under control

Digital magazines? The UK says “No, thank you”

Globally, printed magazines are just as popular as printed books with most readers preferring their copies in paper. With their love for printed magazines, the UK tops the charts. A whopping 78% of Brits prefer their magazines in print, with only 19% claiming to read a digital magazine at least once per week. On the other side of the Atlantic, in Brazil, 63% of respondents read digital magazines on the weekly. Quite the contrast!

Italians read the most magazines

Although the Brits are the most vocal in their preference, it is in fact the Italians who read most of their magazines in print. 57% of Italian respondents claim to read a printed magazine each week. On the other end of the spectrum, in Australia and New Zealand, the figure is less than 35%.

Americans prefer their ads in print

When comparing online ads to print, 46% of global respondents say that they would be more likely to take action after seeing an ad in a printed newspaper or magazine than if they saw the same ad online. In the US, this figure rises to 54%.

The preference for print ads is well-documented. In a Kantar Millward Brown survey of 14,500 respondents across 45 countries, ads in printed magazines reached the highest net positive score out of all advertising formats. Clinical psychologist Scott McDonald, PhD, argues that the slower reading speed associated with print results in increased comprehension and recall – making print ads not only popular but effective, too!

Alive and Kicking– a look into the future of magazines 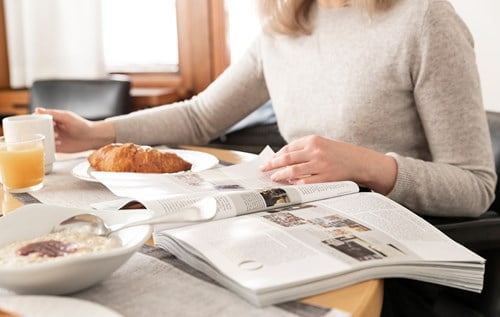 In the spring of 2019, Finland’s yearly national media survey delivered some fascinating results: among the 95 magazines included, only two showed a statistically significant decline in readership.
Read further