Send us a message
Search for contacts here
Find a contact
Look for a job at Stora Enso.
Get a job
Published 8 December 2021 by Katja Pantzar
While some sectors of the retail economy have suffered major turbulence owing to the far-reaching effects of the coronavirus, small bookstores in Europe have experienced a boon to business.

Tucked behind a blue-framed glass door in Berlin’s hip Kreuzberg neighbourhood lies Otherland Buchhandlung, a well-loved independent bookstore specialising in science fiction, fantasy and horror that often uses the hashtag #wirsindkeinalgorithmus – “we are not an algorithm.”

While that might sound like a bit of hashtaggery, it’s not. Instead, that sentiment neatly sums up one of the main reasons many small bookshops are faring well during these challenging times: the human touch.

“Big retailers do what they do best: price and speed,” says Wolfgang Tress, an Otherland bookseller with an expertise in German- and English-language science fiction. “At Otherland, we offer personality, talk, intuition, and experience. When we suggest a title, we have read it and you know who is recommending it,” says Tress.

That personal connection is one of the main reasons that Otherland’s business has increased by 30 per cent during the past two years, says Tress.

He is also quick to credit their success the fact that some federal states such as Berlin allowed bookstores in Germany to stay open from the start of the pandemic, as reading books is considered an essential service for maintaining people’s wellbeing.

“We and our customers are a community,” says Tress. “Being in contact with us by mail, phone or live at Otherland is like being at home with friends.”

Sales of physical books rose in many markets during the first year of the pandemic, 2020, according to a recent BBC news article. The BBC reports that in the UK alone 202 million paperbacks and hardbacks were sold in 2020. This was the first time these sales topped the 200 million mark since 2012. Meanwhile, in the United States book sales topped 751 million last year, which was the highest figure since 2009.

As a result of the pandemic, many people have more free time and are finding solace in the printed word.

“Books slow down and wait for you,” says Tress. And that’s something that many people are rediscovering, especially if they’ve spent a hectic day online in the digital world.

Bibliotherapy from a local bookshop

At Paris’s popular Red Wheelbarrow Bookstore, founder and co-owner Penelope Fletcher says, “Bookstores in France are like pharmacies. People go in to find something uplifting or to help them with whatever their needs may be.”

That means if readers are looking to better understand and deal with an issue such as climate change or taking positive steps to change their lives, they head to their local bookshop, says Fletcher.

The Red Wheelbarrow, which first opened in 2001, specialises in classic and contemporary literature, gastronomy, children’s books in French and English, poetry, history, and politics.

Like Otherland, the Red Wheelbarrow, which reopened in 2018 in the Latin Quarter of the sixth arrondissement opposite the Luxembourg gardens, was able to stay open throughout the pandemic. The Red Wheelbarrow is also in the process of opening a second bookshop on the same street.

“Though at times this was only for a click and collect service, we did provide a human connection, a lifeline for many people who were socially isolated,” says Fletcher. At the height of the pandemic Fletcher would hand customers book packages through the store’s doorway or deliver them in-person from the big basket on her bicycle.

Fletcher credits many reasons for the supportive book culture in France, including the Loi relative au prix du livre, the law on book prices that set a fixed price for new books back in 1981.

Community is also one of the most important reasons behind The Red Wheelbarrow, says Fletcher.

When she closed her bookshop for personal reasons many years ago, a group of friends and colleagues came together with ten different partners to help her reopen, saying: “The bookstore is not yours, it’s the community’s,” she explains.

Traditionally, the holiday season has marked a significant sales period that can make or break some small bookstores’ bottom line for the entire year. Happily, that’s no longer the case for everyone, as people are reading more titles year-round.

“We used to make a big part of our income around Christmas. But that changed, even before the pandemic, which is good because having a bad Christmas is no longer that bad for Otherland,” says Kress.

Reflecting the global mood, titles and genres that are trending right now at Otherland include “feelgood titles for escapism and big movie-adaption-books like Frank Herbert’s Dune and Isaac Asimov’s Foundation,” says Tress, adding that their own recommendations such as Ursula K. Le Guin’s classic Left Hand of Darkness has been on their Top Ten list for a long time.

“Also, Kim Stanley Robinson’s The Ministry for the Future, a tough read about a future in the climate crisis we are facing, is popular,” he adds.

One of their popular items is a surprise book package. Based on language (German or English), previous reading, favourite titles, and budget, Otherland puts together a curated surprise book selection for customers. “During the first lockdown we sent out surprise packages like crazy and it’s still a bestseller, ordered several times a week,” says Kress.

Over at The Red Wheelbarrow in Paris, Fletcher says that literary picks on social media such as Bookstagram and TikTok influence customer choices, as do the winning titles of large literary awards including the Booker, the Nobel, the National Book Award, and the Prix Goncourt.

“As people have more time to read, many are also returning to the classics by Dostoyevsky and Tolstoy, or bestsellers such as Harry Potter that they didn’t have time to read before,” says Fletcher. 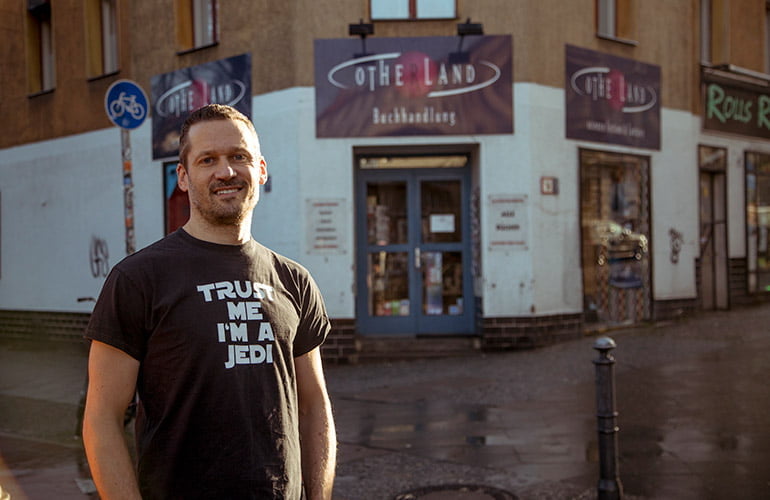 “Books slow down and wait for you, that’s something that many people are rediscovering, especially if they’ve spent a hectic day online in the digital world.

Other topics of interest

Children's books – a success story for the whole family

At home for much of the pandemic, children and their parents have been immersing themselves in the wonderful world of books. And, say industry insiders, it all points to a rosy future for the European children's book market.