Send us a message
Search for contacts here
Find a contact
Look for a job at Stora Enso.
Get a job
Published 12 December 2017
Veracel pulp mill, Stora Enso’s joint operation in eastern Brazil, has been replanting rainforest since 1994, aided by its Veracel Station research and conservation centre. Promoting biodiversity has always been a top priority in this work, and in May 2017 Veracel Station’s environmental analysts witnessed proof that their efforts are being rewarded: a jaguar caught on camera!

The jaguar is a threatened species in Brazil, and in the Atlantic Rainforest region there may only be as few as 200 individuals left, largely due to decades of deforestation prior to Veracel’s time. Most former rainforest areas had been converted into open cattle pastures, often avoided by wild animals because they offer little food or shelter. Until the lucky sighting, there had been no evidence of jaguars in this region since an unconfirmed sighting 20 years ago.

“We’re very excited, because the jaguar is an ‘umbrella’ species, a sign of thriving biodiversity,” says Priscilla Sales Gomes, Environmental Analyst at Veracel Station. “If the jaguar can survive, other smaller species are able to succeed as well. This is the welcome result of years of rainforest conservation work.” 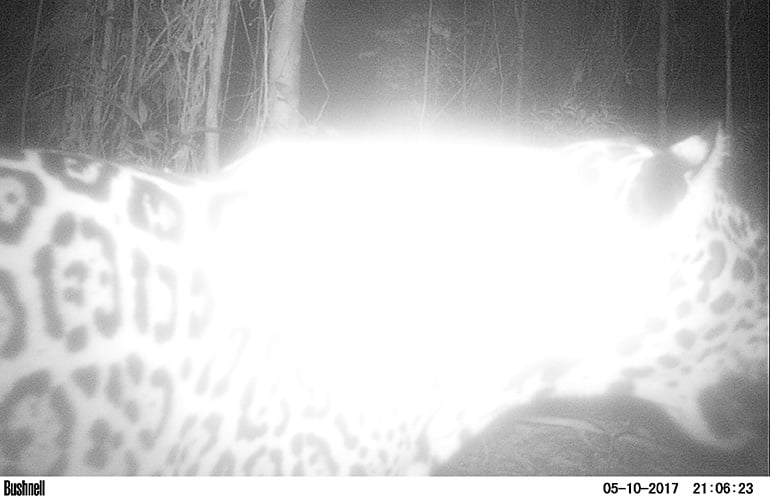 This jaguar passed the camera trap the night before its images were examined.

About half of Veracel’s 215 000 hectares of land is that same degraded land that was once cattle pasture, today used to grow eucalyptus trees. The other half is used to protect existing rainforest and to actively restore degraded forests. Since 1994, Veracel has restored about 6 000 hectares of rainforest habitat and created ecological corridors to connect isolated areas of rainforest to each other – today representing a total area of 50 000 hectares of connected rainforest.

Such corridors help maintain biodiversity by allowing animals and plants to spread more freely. “Ecological corridors help animals to avoid open areas while moving from one rainforest area to another,” Gomes explains. “While we don’t know where exactly this jaguar came from, the corridors certainly make it easier for big cats to roam. Jaguars, in particular, have extensive territories – sometimes up to 40 square kilometres.”

Teaming up to monitor biodiversity

Since 2008 Veracel has worked with Casa da Floresta, a Brazilian consultancy that specialises in monitoring rainforest restoration and biodiversity. “Installing, checking, and analysing images from camera traps is an important part of our monitoring work,” says Elson Fernandes de Lima, Project Manager at Casa da Floresta. “At Veracel Station we do two 30-day monitoring cycles every year. With eight heat-sensitive and motion-detecting cameras we get a total of nearly 6 000 hours of footage annually. Typically, the animals caught on camera are prey animals such as tapirs, armadillos, or deer – big cats are a rare sight!” 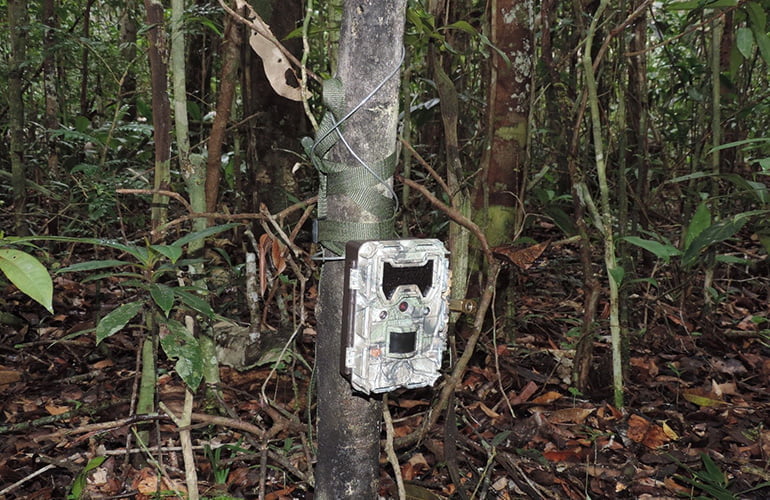 Movement-detecting and heat-sensitive camera traps are fixed to trees by paths used by wild animals.

While the monitoring focuses on rainforest areas, the jaguar sighting is also an indicator of how eucalyptus plantations may affect biodiversity. “Degraded land can be replanted with sugarcane, soy, or eucalyptus – or turned into pasture land,” explains Fernandes de Lima. “Tree plantations lack many characteristics of natural forests, but they still resemble natural forests more than the alternative land uses. Birds, mammals, and other vertebrates often use plantations as part of their habitat, which makes such areas more attractive to large predators such as jaguars.”

While the jaguar sighting is proof of Veracel’s rainforest conservation work paying off, one major threat still remains: illegal hunting. “Almost daily we find evidence of poachers, such as their traps and tracks,” says Fernandes de Lima. “Hunting is very popular here, and big cats may be killed for food or as retaliation after an attack on the hunter’s cattle.”

Veracel Station already organises educational activities about endangered animals to reduce poaching. This work will now be scaled up following the new proof that jaguars are living in the area. “The National Centre for Research and Conservation of Carnivorous Mammals (CENAP) estimates that there are five jaguars here,” Priscilla Sales Gomes says. “We want to make sure that local people know why these animals need – and deserve – protection.”

“Casa da Floresta will now increase the number of camera traps in the area by 60%,” adds Fernandes de Lima. “We’re determined to see another jaguar!”